I met Dwight Steven-Boniecki, the director of “Searching for Skylab” at a TV studio in the UK. Like many musically talented young men, he was then part of a local band. His fascination with Star Wars was in my view rather childish, but I soon discovered that beneath my superficial view there was a young man with great knowledge of cinema, TV, video effects and sound production. It was the end of the era of the fax machines and Dwight was already working on special digital effects for a Star Wars fan movie called “The Dark Redemption”. To me, a recent psychology graduate from Paris, such technical skills were most impressive.

When we met again years later, I was surprised to see Dwight’s fascination with Star Wars transformed into a serious passion for space exploration. To keep up conversation I had to quickly catch up on all the Apollo missions and at least some names of the astronauts. I didn’t know then that I was about to meet Buzz Aldrin, Jack Lousma, Dick Gordon and Scott Carpenter. Talking to them in an otherwise empty room was great fun as you can imagine. Dwight was meeting his heroes and the living legends. I was just chatting to some cool and very interesting guys. As to Buzz Aldrin, he was shut away in a big room of his own and I was not about to queue up with all the crowds just to get him to sign a picture for me.

2. MOUNTAINS OF RESEARCH TURNED INTO BOOKS

Being the technically savvy guy, passionate about space and broadcasting technology, Dwight was looking into the question of how exactly NASA managed to get a TV signal from the Moon and transmit the pictures live back to Earth. Curiously, no one seemed to have asked themselves this question before and Dwight could find nothing clearly digested and put together in a story that he could just grab off the shelf and read.

Soon, mountains of paperwork about TV cameras in space surrounded Dwight and I remember his frequent calls with NASA engineers or experts who would pass him onto the next engineer or expert and the next one to resolve some obscure detail which only that one specialist would know the answer to.

Dwight’s friends were urging him to publish his findings either in a series of articles or in a book. He eventually chose the book and “Live TV from the Moon” was born. 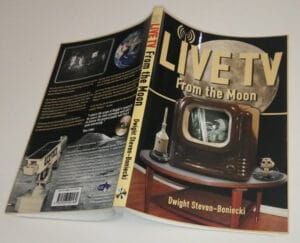 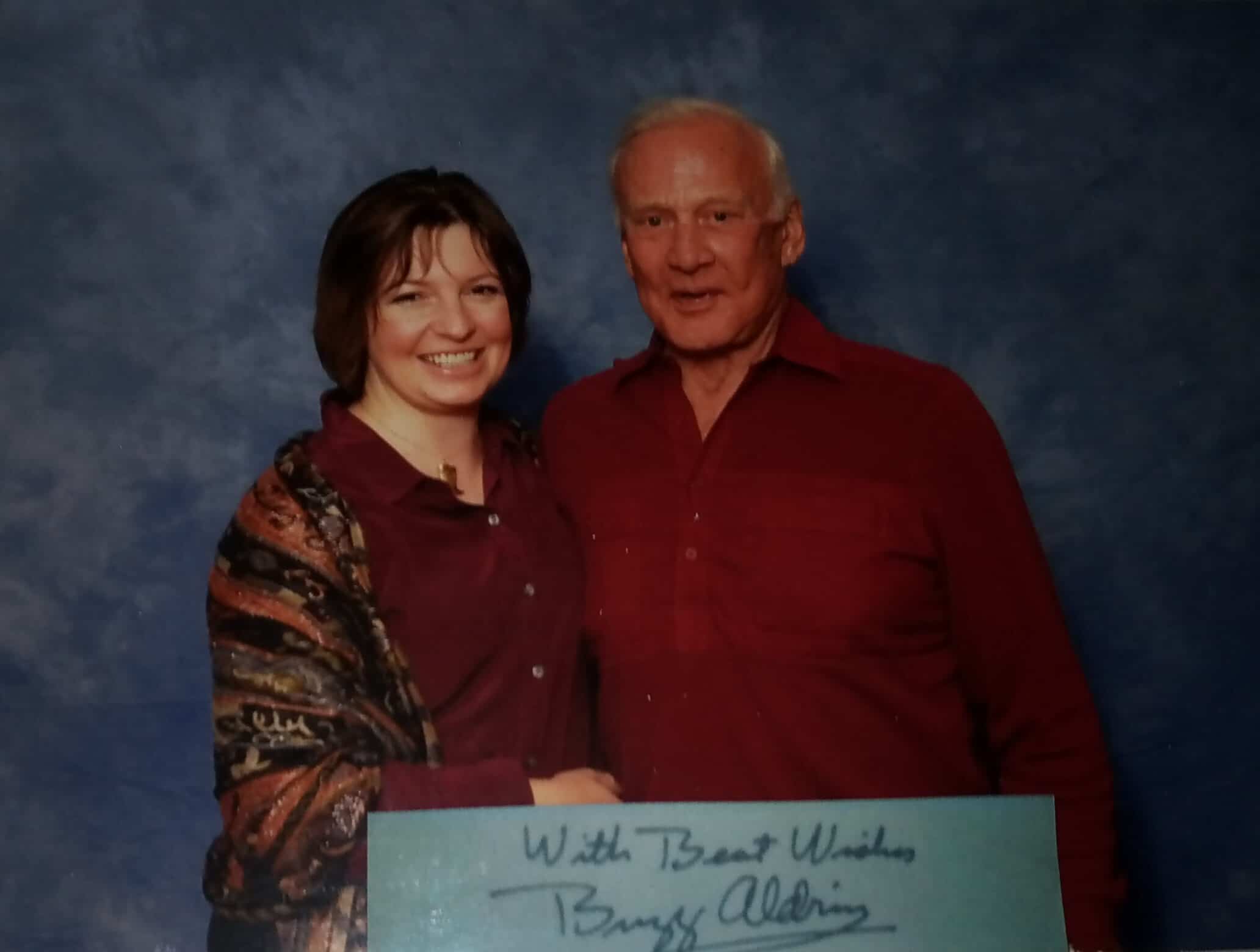 Other books followed and I got used to seeing Dwight passionately going through archive films, meticulously cleaning up old NASA material, documenting and archiving all of the collected information.

At this point I was bravely queuing up with him to meet Buzz Aldrin and being most excited to have the opportunity to chat with him even briefly before a gala dinner. The more I know about space history — and I still know relatively little — the more I find talking to astronauts of any name a very humbling privilege.

3. THIS MOVIE HAD TO BE MADE

The initial discussion between Dwight and I about the creation of the movie was more of an announcement about a film that had to be made rather than a discussion.

There was a distinct sense of urgency in Dwight’s voice. Nobody, except maybe a few more people in the world have ever seen the footage or audio he had discovered over the years.

Historical material of such great value to humanity was deteriorating in front of our eyes and the astronauts who could still give us a first-hand account were not getting any younger. If we hurried, we could still catch their memories on tape. “It’s not on —  Dwight kept saying — that the world doesn’t see what I get to see and happily ignores all this!

No self-respecting historian can watch physical evidence of such importance disintegrate in front of their eyes without trying to preserve it for posterity. Even less,  knowing that society already forgot most of what has happened. The material Dwight found researching  many hundreds of hours of video and listening to many hundreds of hours of audio was of such importance, that he felt he had to preserve it for future generations in a story that they would like to hear.  “If I don’t do it now, who will? When?” – he kept saying.

I was working on a number of projects at the time which meant that I didn’t have a spare minute to help. Still, my company had a budget that seemed large enough at the time to absorb the costs of a small, independent movie production. I just wanted to ensure that this project would fit the mission statement and fit with the overall  goals of the company.

I created 1080 Virtual Media Consulting Ltd. with the view of assisting experts in making learning easier for their learners without compromising on results. To me, digital solutions – existing or new ones – are key in the path to success.

In this case, I had an expert right in front of me. A film may not be the most digital tool I can think of, but digital education can’t evolve without well thought-through video and sound. In other words, I just found my next project. I had seen Dwight’s earliest productions and I knew how much natural talent he brings to the video production. His expert status on Skylab is unquestionably recognised even by the Skylab astronauts themselves.

Would this be enough to pitch his idea to a production studio and trust that Dwight would retain complete creative freedom? Would any production studio agree to a project like this at a drop of a hat? None of us believed they would. Instead, we both jumped into the film’s production head first.

The movie was to turn 10 years of research into 1.5 hours of a powerful story for anyone interested in the subject of space.

We wanted the story of Skylab to share Dwight’s findings, but Skylab is about so much more than just a Space Station. We wanted to see the audience inspired by the story to look for more answers on their own. If a novice space fan happened to stumble upon our movie, we wanted to reward their curiosity. We have integrated the most jaw-dropping historical material into the movie to do just that!

Space exploration experts were impressed when they saw the movie for the first time. So were the Skylab astronauts and their families, but the media not so much.

We soon realised that doors were closing everywhere. film festivals, sponsors, distributors… Other independent filmmakers were cheering us on “Welcome to the world of independent film making. We’ve all been there.” I decided to run a test to see what Google says about the best independent documentaries in 2019. Sorry Google, but the result was funny, “independent” clearly meant  “backed by a major media mogul”.  I guess everyone is entitled to their own definition of “independent”.

Nevertheless, the hardest lesson came from our naive thinking that space fans didn’t need to be marketed to.

Why did we ever believe that space enthusiasts would quickly understand the importance of Skylab just because we told them so?  Why did we think that most would jump at the occasion to see historical video evidence so obscure, that not even NASA realised their importance? Because they were passionate about space?

The overwhelming positive reviews didn’t generate the wave of interest we were hoping for. Marketing now became key and one of us had to learn it from scratch. That someone had to be me.

You may find it strange coming from someone who runs their own business, but after 15 years in the corporate world of IT, I never had to market to clients before.

First I needed to get to know the story of Skylab much better. I realised that despite assisting with almost every interview, I never really understood what was being discussed until the day I saw the first completed version of the film. Finally all the curious pieces of the puzzle came together! Finally I had a clear picture of what the Skylab story was all about.

Every version I watched since has been revealing. I started to see details I didn’t notice before. In the end I was left inspired to learn more about Skylab to answer questions the movie couldn’t answer anymore.

I understand the words of David Hitt, the co-author of the book “Homesteading Space”  so much better today: “(…) this story really hadn’t been told in the way that I wanted to see it preserved to the world!”

I couldn’t agree more. “Searching for Skylab” gave me the first glimpse into what this NASA program was all about.

For someone who isn’t a “space fan” to never grow tired of watching the same movie on that subject over and over again is rather surprising. To me in any case it is completely unexpected.

Given my growing fascination with the story of Skylab I sometimes wonder why “Searching for Skylab” is the first-ever feature film made on this subject? Is it because:

1. The Space Station crashed — and therefore – like Dwight says – until diving into the subject, you have the impression that it was a failure and is not worth looking up? A point of view perhaps confirmed because media overall rarely ever speak about Skylab?

2. The science done on Skylab is so overwhelming, that the research alone would cost too much? Skylab required 1000 senior scientists and engineers to analyse its data at the time. Who today has the resources to seethe through so much data to understand a Space Station that was left to rot away in some space archives? Maybe people feel that it’s “a waste of time” and “too complex” to market the story altogether?

It makes me immensely proud to have been given the opportunity to produce such a unique documentary. One that is inspiring people like me, the curious ones, but no space fans.

I am most grateful to our Kickstarter backers, who believed in our skills to make this a great movie and made it possible for us to finalise its production.

The youngest fan of the movie we know of is an American girl who turned 11 shortly after watching the film at the U.S. Space and Rocket Center in Huntsville, AL. Her passionate support confirms to me that we must have done a great job in sharing complex knowledge and entertaining the viewer at the same time. For a child to be interested enough to sit through an entire 95+ minutes of a documentary and then to become its fan makes me, the producer, feel very deeply honoured.

Marketing remains a work-in- progress however, so if you’ve never heard about this movie before, please accept my very personal apologies. You can read about it on our website or you can go directly to renting or downloading it from Vimeo.

We are working on releasing it on iTunes, Hulu, Google Play, Blu-ray and maybe DVD. However, these questions too are budget sensitive and likely to take a month or two to complete. What I know is that if you are into space exploration you will be delighted with the result! 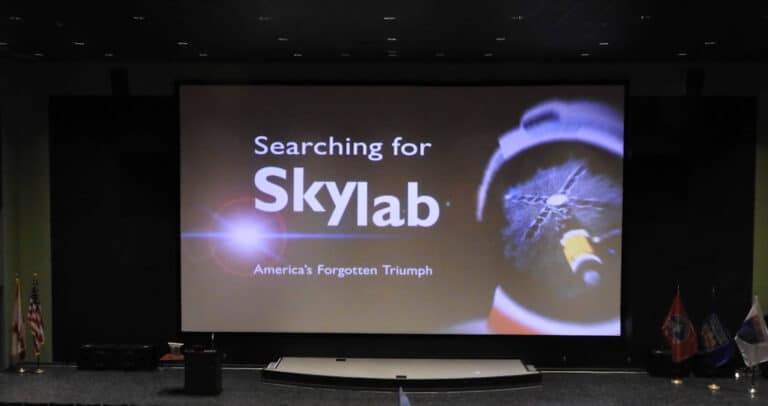 "On February 8, 2019 the documentary ﬁlm premiere for "Searching for Skylab " was held at the Center. The ﬁlm was extremely well done, and it was an excellent event. Skylab astronauts, Colonel Jack Lousma and Dr. Ed Gibson, were present to serve on the Skylab Panel, as well as Richard Garriott, Owen Garriott, and Jerry Carr via Skype."